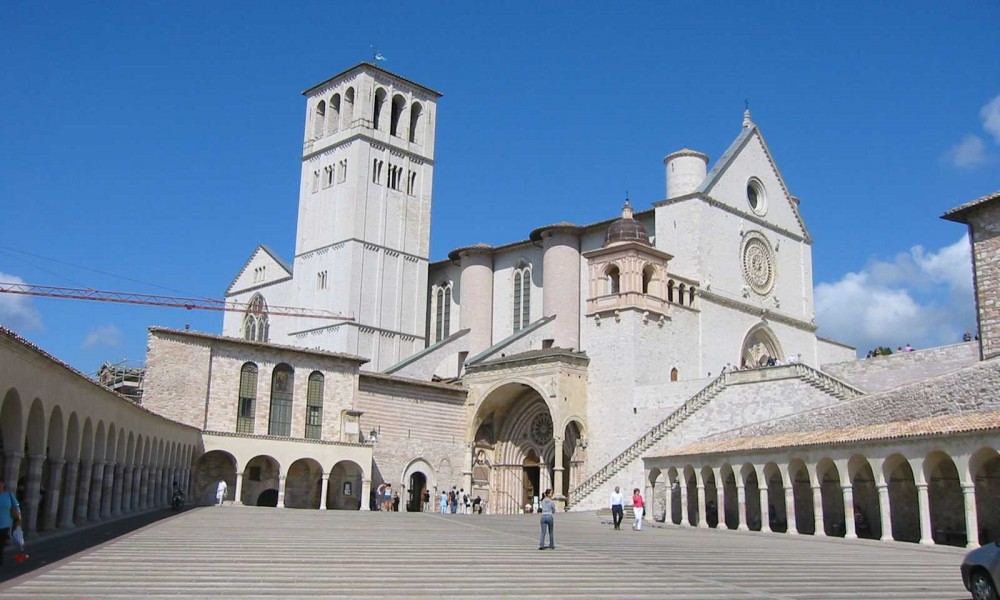 Crowned by a ruined castle, Assisi spills downhill to its famous Basilica of St. Francis. The town is beautifully preserved and rich in history. Francis’ message of love, simplicity, and sensitivity to the environment has a broad and timeless appeal which makes this a perfect setting for a day trip in the Umbria region.

ASSISI
Assisi is famous for St. Francis, a simple friar, who around the year 1200 countered the decadence of Church Government and society in general with a powerful message of non-materialism. Like Jesus, Francis taught by example, living without worldly goods and aiming to love all creation. A huge monastic order grew out of his teachings, which were gradually embraced by the Church. Christianity’s most popular saint and purest example of simplicity is now glorified in beautiful churches, along with his female counterpart, St. Clare. In 1939, Italy made Francis and Clare its patron saints.

Basilica of St. Francis of Assisi
Basilica di San Francesco d’Assisi is the mother church of the Franciscan Order and is a World Heritage Site. The basilica is considered one of the artistic and religious highlights of Europe. The Franciscan monastery (Sacro Convento) and the lower and upper church (Basilica inferiore e superiore) of St Francis were begun immediately after his canonization in 1228. Simone di Pucciarello donated the land for the church, a hill at the west side of Assisi, known as “Hill of the Damned” . Today, this hill is aptly called “Hill of Paradise”. The basilica is frescoed from top to bottom by leading artists of the day: Cimabue, Giotto, Simone Martini and Pietro Lorensetti. From a distance , you see the huge arcades ‘supporting’ the basilica. These were the 15th century quarters for the monks.

Note: The major monuments and urban fabric of Assisi are enlisted as UNESCO World Heritage Sites.
Note: Length of the tour is 8 hours.