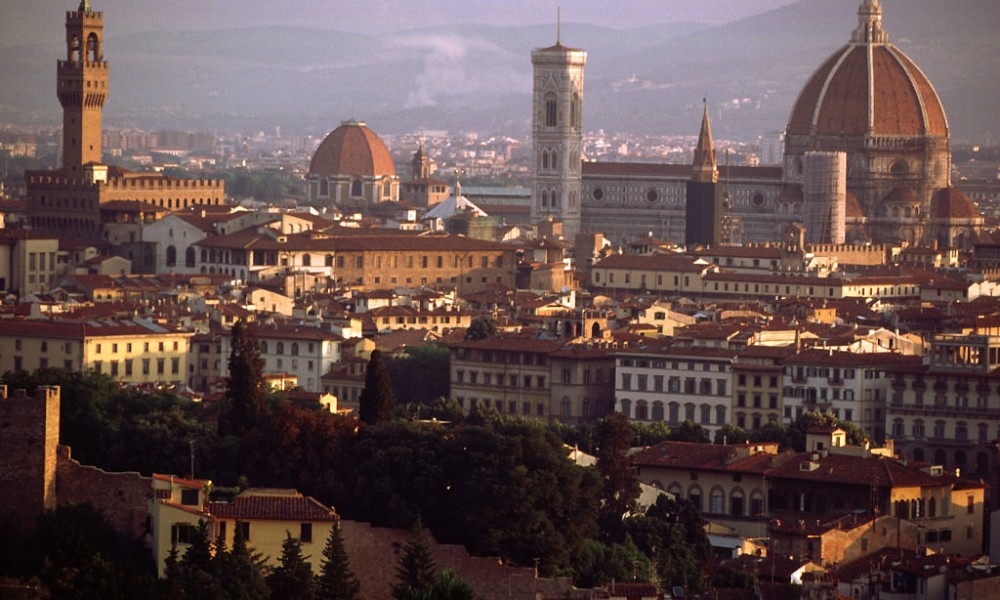 The city lies on the Arno River and is known for its history and importance during the Middle Ages and in the Renaissance period, especially for its art and architecture. Brunelleschi’s stupendous cathedral dome dominates the cityscape and the close-up view is even more breathtaking. A visit to Italy would be incomplete without a Full Day Tour to Firenze. Spend your day exploring this open-air museum in the downtown historic center or choose to experience some of the most sought-after art in the world and see the development of the Renaissance with the amazing collection of art at the Uffizi Gallery. Florence continues to attract millions of tourists each year and was declared a World Heritage Site by the UNESCO in 1982.

FLORENCE
Florence is the capital city of the Italian region of Tuscany and the most populous. Florence was first called Florentia and was originally founded by Julius Caesar in the 59 BC. Located on an important road linking Rome to France, it found itself destined to fame and fortune. It became a significant trade center with powerful artists’ guilds in the 13th century, trading primarily in wool and silk throughout Europe. Florentine bankers issued the first monetary bills along with the famous florin coin. There were many wealthy families in Florence, among which the renowned dynasty of the Medici family stands out. The Medici were bankers who became influential rulers in Florence and Tuscany for over three hundred years. From their position of power and prestige they commissioned artists and building projects, and during the 15th century Lorenzo “the Magnificent” de Medici became known as the Prince of the Renaissance. He fostered the arts, philosophy, intellectualism, poetry, and politics so that they became a dominant element of support for invention, science, and humanism.

Duomo di Santa Maria del Fiore
The Cathedral of Florence with the famous towering cupola known as Brunelleschi’s Dome has the third-longest nave in Christendom and is the fourth biggest church in Europe. The exterior facade consists of polychrome marble panels in various shades of green and pink bordered by white. The Duomo di Firenze is notable for its dome designed by Filippo Brunelleschi along with the bell tower by Giotto and the baptistery with ‘The Gates of Paradise’ by Lorenzo Ghiberti.

Ponte Vecchio
The Ponte Vecchio, Old Bridge, is a symbol of Florence and was first constructed by Romans at the narrowest point of the Arno river. Florence’s most famous bridge is lined with shops that have traditionally sold gold and silver. It is the only bridge that wasn’t destroyed by the Nazis during their Italian withdraw in 1944. Butchers initially occupied the shops; the present tenants are world famous jewelers, art dealers and souvenir sellers. Notice the passageway above the bridge which is called the Vasari Corridor. In less secure times, the city leaders had a fortified elevated path connecting the Palazzo Vecchio to the Palazzo Pitti passing over the Uffizi Gallery and the Ponte Vecchio.

Florence Museums
The Uffizi Gallery, one of the oldest and most famous art museums in the world, is located in the Palazzo degli Uffizi. This gallery houses the greatest collection of Italian paintings in the world and features works by Giotto, Leonardo, Raphael, Caravaggio, Rubens, Titian and Michelangelo and a roomful of Boticelli’s, including the Birth of Venus.
The Galleria dell’Accademia is the museum that houses Michelangelo’s world famous sculpture of David. The Renaissance was the merging of art, science and humanism. More than any other work of art, when you look into the eyes of David, you are looking into the eyes of the Renaissance man.
If you would like to experience the museums of Florence please let us know in advance and we will acquire the tickets and arrange a special entrance reservation in order to skip the cue and gain access to the museum immediately.
As we exit the city on our return trip back to Rome, we will make a stop at the famous square of Piazzale Michelangelo for a magnificent panoramic view of Florence.