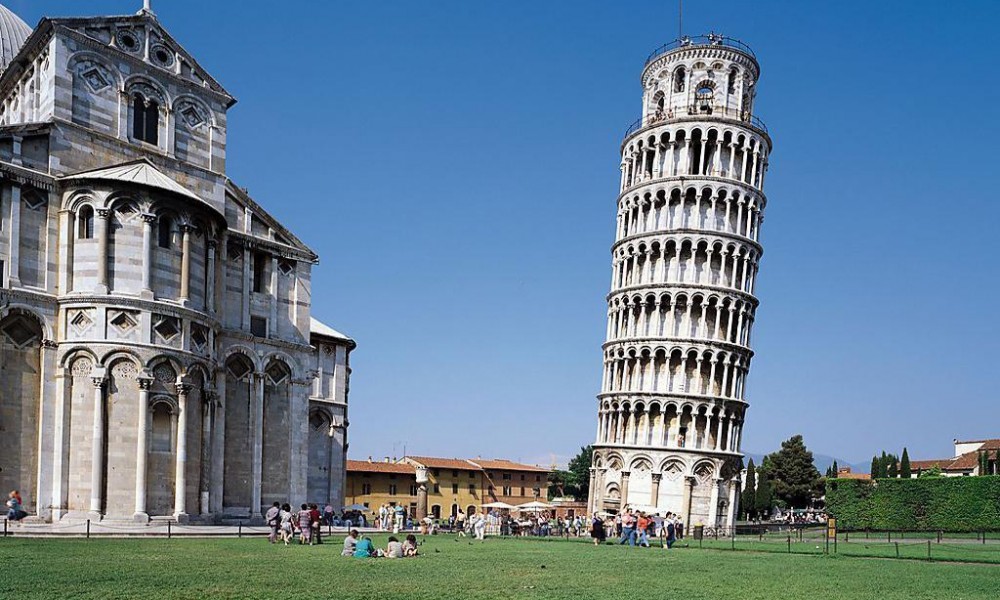 Pisa is a city in Tuscany on the right bank of the mouth of the Arno River on the Ligurian Sea. As a port, the city enjoyed easy access to the Mediterranean. The Romans had made it a navy base, and by medieval times, it had gained much power. The Pisan ‘Republic’ prided itself on its independence and used its wealth to build the grand monuments of the Field of Miracles. As a result, the city is known worldwide for its famous bell tower, the leaning tower of Pisa. Lucca is very famous for its intact Renaissance-era city walls although the city has expanded beyond the wall’s boundaries. It is surrounded by well-preserved ramparts, layered with history, and charms its visitors by its quaint yet urban environment. Pisa and Lucca are two Tuscan cities that you won’t want to miss!!!

PISA
Field of Miracles
Four large white buildings make up the most beautiful green lawn in Italy and Pisa’s religious center located at the Campo dei Miracoli. The Duomo, the bell tower, the Baptistery and the Camposanto Cemetery were all created using the same building materials, similar decoration and tendency toward circular designs giving the field a pleasant unified feeling. This style has been referred to as Pisan Romanesque which is very light and elegant.

Baptistery of Pisa
The Baptistery of St. John is the largest in Italy with the building standing at 180 feet tall and is very interesting for its great acoustics. The remarkable acoustics of the building are due to the 250 foot-wide dome. The 15th century architects who built the dome intended this building to be not just a Baptistery but also a musical instrument. The construction was started in 1152, in replacement of an older baptistery, and completed in 1363. You will also find inside Nicola Pisano’s pulpit which is said to be the world’s first Renaissance sculpture.

Leaning Tower of Pisa
The Leaning Tower of Pisa or simply The Tower of Pisa is the campanile, or freestanding bell tower, of the Cathedral. It is situated behind the Cathedral of PIsa. Although intended to stand vertically, the tower began leaning to the southeast soon after the onset of construction in 1173 due to a poorly laid foundation and loose substrate that has allowed the foundation to shift direction. The Tower is nearly 200 feet tall and 55 feet wide, weighing 14,000 tons and leans at a 85 degree angle. There are eight stories consisting of a simple base, plus six stories of columns and a belfry on top. The tower was built over two centuries by at least three different architects and you can see how each architect tried to correct the problem of leaning.

LUCCA
Lucca was founded by the Etruscans and became a Roman colony in 180 B.C. The rectangular grid of its historical center preserves the Roman street plan, and the Piazza San Michele occupies the site of the ancient forum. Lucca was the second largest Italian city state, after Venice, with a republican constitution to remain independent over the centuries. In 1805, Lucca was taken over by Napoleon, who put his sister Elisa Bonaparte Baciocchi in charge as “Queen of Etruria”. This affair is commemorated in the famous first sentence of Tolstoy’s War and Peace. The walls around the old town remained intact as the city expanded and modernized, unusual for cities in the region. As the walls lost their military importance, they became a pedestrian promenade which encircled the old town, although they were used for a number of years in the 20th century for racing cars. They are still fully intact today and is Lucca’s most remarkable feature and most enjoyable attraction especially when explored on foot or circled with a bike.

Piazza Anfiteatro
Just off the main shopping street lies the architectural spirit of a Roman amphitheater that can be felt in the delightful Piazza Anfiteatro. With the fall of Rome, the theater which seated 10,000 was gradually robbed of its stones and inhabited by a mixture of hut-like homes. The huts were cleared away at the end of the 19th century to better appreciate the town’s illustrious past. Today the square is a circle of shops and restaurants that become a lively scene after dark. Today’s street level is nine feet above the original arena floor. The only bits of surviving Roman stonework are a few arches on the northwest exterior of the piazza.

San Michele in Foro
San Michele in Foro is one if the main Basilicas of Lucca. It was built over the former Roman forum. Until 1370 it was the seat of the Consiglio Maggiore, Major Council, the commune’s most important assembly. Notable is the fancy façade from the 13th century designed in the Pisan Romanesque style. The basilica lies at the entrance of Piazza San Michele which is a gathering center today as it has been since the Roman times.

Note: Length of the tour is 8 hours departing from Florence.