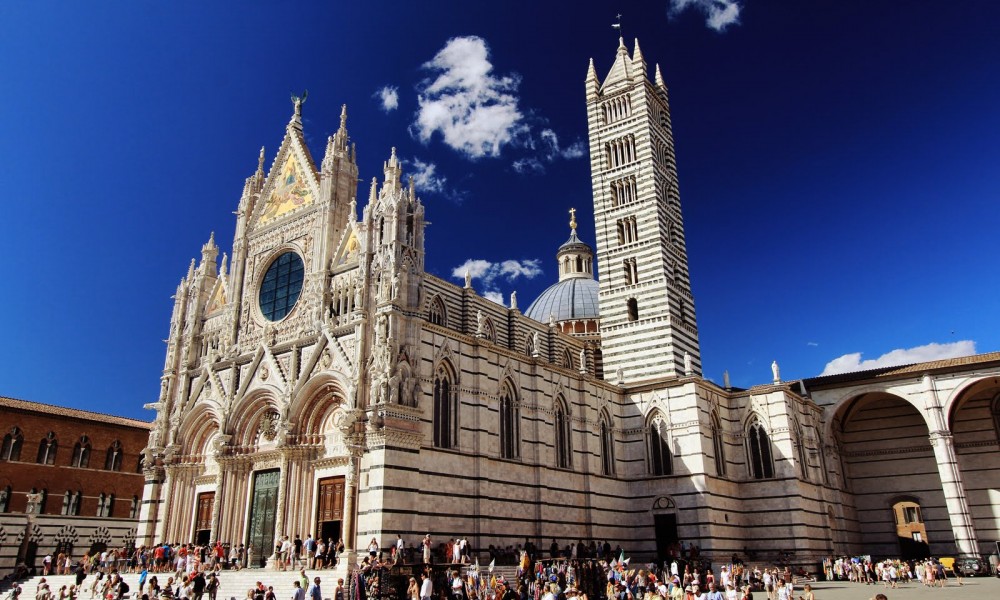 Siena was first settled in the time of Etruscans c. 900 BC to 400 BC. Siena’s greatest attraction is it’s cityscape which can be enjoyed without visiting one museum. The heart of the city is the Piazza del Campo which is known for hosting the Palio horse race. Enjoy the day by exploring the winding medieval streets and neighborhoods of this beautiful town.
Itinerary
Pick up at the hotel

Duomo di Siena
Siena’s cathedral, the Duomo, begun in the twelfth century, is one of the great examples of Italian Romanesque architecture. It’s main façade was completed in 1380. It is unusual for a Christian cathedral in that it’s axis runs north-south. This is because it was originally intended to be the largest cathedral in existence. After the completion of the transept and the building of the east wall the money ran out and the rest of the cathedral was abandoned.
Inside there is the famous Gothic octagonal pulpit by Nicola Pisano (1266–1268) and the hexagonal dome of the cathedral is topped with Bernini’s gilded lantern which appears like a golden sun. Within the Sacristry are some perfectly preserved Renaissance frescos by Ghirlandaio and beneath the Duomo in the baptistry is the marvelous bas-reliefs by Donatello, Ghiberti, Jacopo della Quercia and other 15th century sculptors. The Museo dell’Opera del Duomo contains Duccio’s famous Maestà (1308–1311) and various other works by Sienese masters.

Note: The historic center of Siena is listed by UNESCO as a World Heritage Site.
Note: Length of the tour is 9 hours.